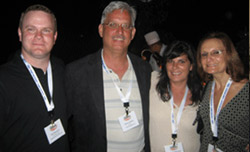 Saying that Cargo Network Services (CNS) would no longer be perceived in any quarter of air cargo as only for the rich and influential companies, President Jens Tubbesing opened the 17th Annual Partnership Conference in San Diego today.

Promising new initiatives to reach into air cargo to unlock participation from small and medium sized freight forwarders and ground handlers, Mr. Tubbesing declared that 2007 would be the year that CNS launches “a road show” with a campaign to visit and enlist participation from a broad spectrum of U.S. air cargo companies located in Los Angeles, New York, Chicago, Atlanta and Miami.

Speaking before a record audience at any CNS Partnership Mr. Tubbesing declared that the IATA organization will be a powerful force for change and that inclusion of companies both large and small will drive the wagon from this point forward.

“The World Cargo Symposium last month in Mexico City was a big success.
“CNS has approved and is promoting the IATA Cargo agenda including quality benchmarks, security, efreight and more.”
Keynote speaker Monika Ribar, President & CEO of Panalpina said for her part she was both proud and glad to be given the opportunity to address what has traditionally been an “all boys club” in the air cargo business.
“I’ll admit that it’s a man’s world,” she said.
“But the good news are the possibilities.”
Monika went on to declare big changes in the upper management of the Swiss firm will come forth at that company’s annual general meeting in mid-May.
Later as Ms. Ribar unveiled an extensive line-up of upper level executives’ pictures on power point, it was noted that despite Panalpina being one of the few companies in or out of air cargo to gain parity with roughly a 50/50 split amongst male and female employees, she in fact was the only top female executive at the firm.
“As a matter of fact there are three of us” she assured, “and plenty of room for more.”
Panalpina, we learned is now number three in the world in air freight, number 40 in the ocean freight business with 500 offices in 160 countries and 14,000 employees.
Ms. Ribar said Africa is an area of certain growth for Panalpina and also a place where “social responsibility in Ghana for example has seen our support for programs to aid in critical eye care that is saving people’s vision in that country.”

Highlighting the program today Tuesday May 1 will be a special tribute to John C. Emery, Jr. who passed away April 19, delivered by air cargo legend and past CNS Chairman Guenter Rohrmann.
The Emery salute will include a moment of silence as measure of respect to mark the great man’s passing.
Following will be a much-anticipated address by Carsten Spohr, CEO & Chairman of the Executive Board of Lufthansa Cargo who will speak to the challenges of innovation during difficult times.
Lufthansa may have to search deep down to find anything difficult about recent record profits.
Later Tuesday a blue ribbon panel including Jack Boisen of Continental Airlines Cargo (left) will attempt to tackle the hot button topic “New Security Legislation”.
Geoffrey